KHO-KHO is a game played in two innings by 12 nominated players out of 15. In the beginning, nine players start the game and 3 of them remain reserves.

One team becomes the chasers and another team becomes the defenders or runners. In the game, the active chaser chases the runners, tags and touches them, and makes them out. Each team has to chase and defend for nine minutes twice in a match.

Kho-Kho is played in two innings; each of the ‘innings consisting of two halves of nine minutes with an interval of five minutes. With the game -time and intervals can be represented by 9:5:9+5+9:5:9 (first Innings + Interval + Second Innings). 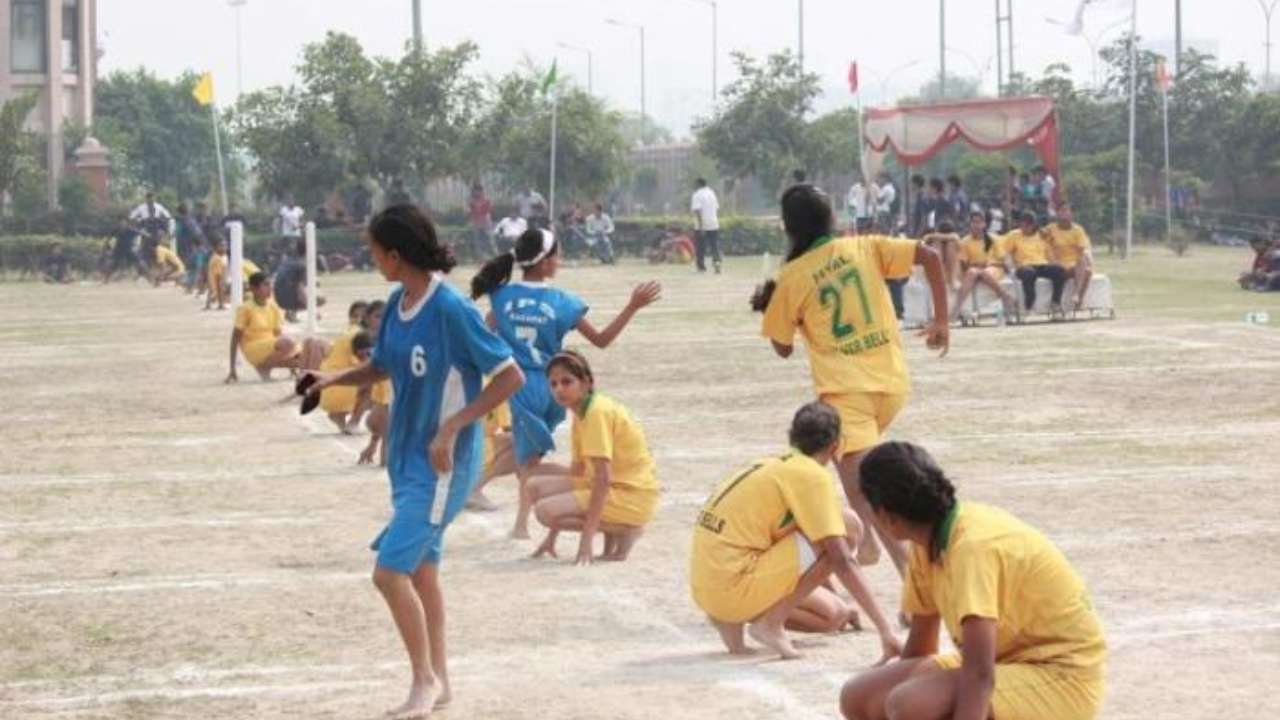 They change their position of ‘chaser and ‘runner’ after the completion of the first half in each innings. In this way, only one team becomes the scoring team in each of the two halves of an innings.

Kho Kho is currently played by 25 countries across the world. “Kho Kho was formally recognized by the Olympic Council of Asia during the 18th Asian Games held in Jakarta, Indonesia, in 2018.

– The KHO-KHO playground is rectangular. It is 29 meters in length and 16 meters in breadth. There are two rectangles at the end.

– Eight cross lanes lie across the small squares and each of it is 16 meters in length and 30 cm in breadth.

– At the end of the central lane, two wooden posts are fixed.

– The post shall be made of wooden poles that are smooth all over.

– The top of the post shall be flat without any sharp edges.

Eight members of the chasing team sit in their eight squares on the central lane, alternately facing the opposite direction, while the ninth member is an active chaser. The active chaser stands at a pot of the posts, ready to begin the chase. Members of the chasing team have to put their opponent out. touching them with their hands but without committing a foul. A defender can be dismissed in three ways:

i. If he is touched by an active chaser with his hand without committing a foul.

ii. If he goes out of the court on his own.

iii. If he enters the court late.

Defenders enter the court in groups of three. After the third and last defender of the group is out, the next group must enter the court. Defenders have full freedom of movement on both sides of the central lane but the active chaser cannot change the direction to which he is committed. He cannot cross the central lane. An active chaser can change position with a squatted passive chaser by touching him from behind by hand and uttering the word “Kho” loudly and simultaneously.

At the end of the innings, there is a half-time break of 9 minutes and an interval of 5 minutes, in between the turns. Each side alternates between chasing and defense.

The sport comprises two teams with 12 players each (as per the principles of the Asian KHO-KHO Federation 15 players each) within the team while only 9 players actually play.

A  Kho-Kho Player must know all skills of Kho Kho. Name any two basic skills of KHO-KHO are:

B. Sudden Change of direction

I. Getting in square and getting off from the square

i. The team to win the toss has the option to choose either to chase or run.

ii. The active chaser is not allowed to turn the body more than 90 degrees from the direction of the run.

iii. The active chaser is allowed to turn back after crossing the post line.

iv. The active chaser may kick on the post and return.

v. The active chaser is allowed to go to the other side of the lane after going around the post.

vi. The active chaser is not allowed to touch or cross the central lane.

vii. The active chaser must tag on the back of the passive chaser and shout KHO-KHO simultaneously.

viii. The Kho must be given to the passive chaser next to the post if s/he is touched at thy time of giving a Fake Kho.

x. If the chaser commits a foul, s/he should stop chasing the runner and immediately run towards the direction shown by the referee to continue the game.

xi. The passive chasers are not allowed to obstruct the runners.

xii. The runners are not given out until both feet step outside the playing area.

xiii. There are nine players in a playing set and three reserves in a team.

xiv. The substitutes are allowed in the chasing team but runners can be substituted before the game starts.

‘Chaser’ team takes a sitting position within the cross lanes with opposite back in 8 squares and one player stands near the pole. 5. Chaser team attempts to catch the running players while passing on Kho from one player to a different.

The equipment utilized in kho kho is poles/post, strings, metallic measuring tape, lime powder, wire nails, two watches, sorts of rings having an inner circumference of 28.25 and 31.4 cm, score shots (like a whistle, for instance), and equipment to record the results.

Kho Kho may be a popular tag game invented in Maharashtra, India. it’s played by teams of 12 nominated players out of fifteen, of which nine enter the sector who sit on their knees (chasing team), and three extra (defending team) who attempt to avoid being touched by members of the opposing team.

In kho kho how many times did they attack

Actually, there is no certain time limit for Kho Kho as with Football or Hockey.

There are 2 innings in a match. An inning is consists of Chase & Defence turns which are for 9 minutes each.

There is an interval of 6 min after every inning & 3 min break between two turns. So it all add to this,

how to play kho kho

How many players in kho kho