The Long Jump is a Game/Sport that measures who can jump the farthest horizontal distance. An athlete sprints on a runway, springs from a takeoff board, sails through the air, and lands in a sand-pit.

It is a foul if the athlete steps beyond the take-off board during the run-up.
The phases of Long Jump are the Approach, Takeoff, Flight, and Landing (ATFL). 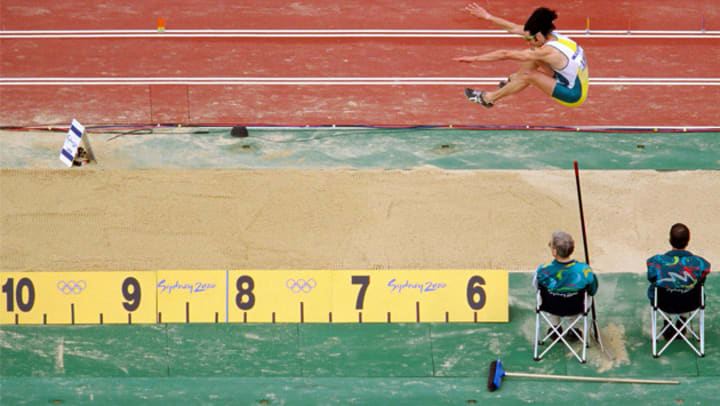 The objective of the approach run is to achieve a good speed. The athlete should develop a good running speed and rhythm. The length of the run should be short for beginners. The speed generates the lift of the body from the take-off. Take-off helps to cover a good distance.

After the take-off, the athlete should push the abdomen forward with hands stretched up, as if you are hanging on a horizontal bar with the abdomen popping outside.

At the landing, the athlete should aim to get the heels as far as possible away from, the take-off board. The heels should land first to make sure that you do not fall behind in the sand.

As the feet make contact with the sand, press the heels downwards .8 aid allows the hamstrings to raise the hips. As the hips rise to twist them to one side and allow the forward momentum to carry the body past the landing position.

The long jump was an event included in the Ancient Greek Olympics, although it had significantly different rules back then.

The long jump for men has been a modern Olympic event since 1896, along with the standing long jump. However, the latter event was dropped after the 1912 Olympics. A women’s Olympic long jump event was added in 1948. The event is sometimes called the broad jump.”

High jumpers must clear the crossbar without letting the crossbar fall off.  The high jumper must take off on one foot. In the high jump, athletes have three chances to jump over a crossbar set between two upright posts.

The competitors run towards the bar and then take off to make a jump. After clearing the crossbar, they land on the pit.

Western Roll is a technique of high jumping in which the trailing leg lifts first. In this technique, the cross-bar is approached on a diagonal. The inner leg is used for the take-off and the outer leg is kicked up to lead the body sideways over the bar.

1. Write any 4 stages of long jump

The 4 stages of the long Jump are as follows:

The above stages are explained in the second paragraph.

2. How long my jump should be to participate in the Olympics?

To take part in Olympics you need to win all your competitor in your country.

3. What condition of fouls in high jump?

The following steps should be remembered:

a. If an athlete takes off from two feet.

b. If the athlete touches the landing area beyond the plane of the bar without clearing the bar.

c. If the athlete knocks the bar off the support.